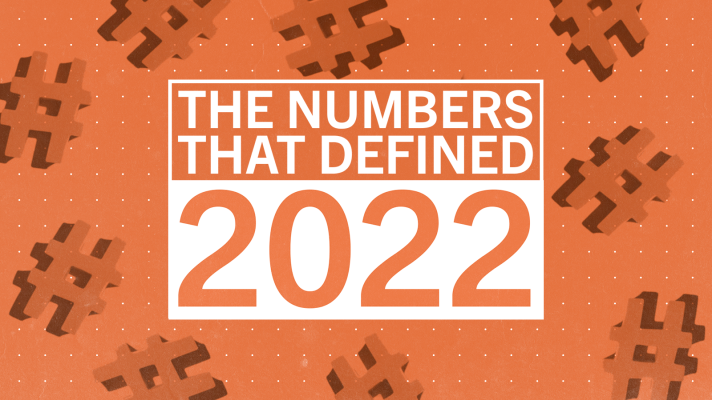 The Numbers That Defined 2022


What a year 2022 has been. There was so … much … news. We saw record-high inflation, war in Ukraine, a landmark Supreme Court session, continuing effects of the pandemic, the Winter Olympics, the death of Queen Elizabeth II, the World Cup and, of course, the midterms. In typical FiveThirtyEight fashion, we’ve been reflecting on 2022 the way we do best: through numbers. Here, seven of our reporters share some of the most important stats of the year, highlighting big political decisions, feelings of the electorate and hints at what’s to come in 2023.

In September, the U.S. Census Bureau released its annual supplemental poverty rate for the previous year. That’s the poverty rate after accounting for the impact of key government programs targeted at low-income families, among other things. For reporter and editor Santul Nerkar, the defining number of the year was 7.8 percent, the supplemental poverty rate for 2021 and lowest rate on record. It was the first concrete measure of how COVID-19 stimulus money affected poverty in America.

In June, the Supreme Court released its decision in Dobbs v. Jackson Women’s Health Organization, overturning Roe v. Wade as the law of the land. In short order, many states enacted abortion bans, including total bans without exceptions for rape or incest. For senior writer Amelia Thomson-DeVeaux, the defining number of the year was 10,000 — that’s how many fewer legal abortions there were in just the first two months after Roe v. Wade was overturned.

The number that captures the impact of the Dobbs decision | FiveThirtyEight

Per- and polyfluorinated chemicals, or PFAS, are used in all sorts of household products, from nonstick pans to dental floss. These pervasive chemicals are dangerous to human health, and the government and industry are finally starting to crack down on them. That brings us to senior science reporter Maggie Koerth’s numbers of the year: four, the number of PFAS the Environmental Protection Agency released new guidelines for, and 4,700, the rough number of different PFAS chemicals out there.

The EPA is finally addressing 4 dangerous ‘forever chemicals’ — out of over 4,000

Denying the results of the 2020 presidential election was the cornerstone of many Republican campaigns this election cycle. Election denial is hardly a new thing, but it reached unprecedented levels in the 2022 midterms. That’s why 47 is the defining number of the year for politics and tech reporter Kaleigh Rogers. It’s the percentage of Republican candidates who ran for House, Senate, governor, secretary of state and attorney general this year and didn’t accept the legitimacy of the 2020 election.

Heading into the midterm elections, Americans told pollsters that one issue was their top priority: the economy and inflation. For senior writer Monica Potts, the 9.1 percent inflation rate in June topped her list of most important stats of the year. Here she explores the ways — big and small — that historic levels of inflation affected American lives in 2022.

The Republican margin in the House

The results of the 2022 election were worse for Republicans than one might expect, given that the president’s party usually loses ground in the midterms. In the U.S. House, Republicans gained a majority but only a slim one. They won by only nine seats, which for editor Maya Sweedler is one of the most important numbers of the year. What Republicans will — and won’t — be able to do with that majority will define American politics for at least the next two years.

The number that will shape Republicans’ politics in 2023 | FiveThirtyEight

With Congress divided between Democrats and Republicans after the 2022 midterms, some of the most important political shifts of the next few years could be coming at the state level. Those new policies might lean liberal because, for the first time in 12 years, more Americans will live in states totally controlled by Democrats than by Republicans. That’s why senior elections analyst Nathaniel Rakich picked 140 million as his defining stat of the year. It’s the number of Americans who will soon be living in a state where Democrats will have total control over state government.

140 million Americans will live in states controlled by Democrats | FiveThirtyEight

Thanks for watching, reading and listening to FiveThirtyEight this year. We’ll see you in 2023!

2023-01-18
Previous Post: Who Was Judith Leyster, and Why Was She So Important? – ARTnews.com
Next Post: Zack Snyder’s ‘Rebel Moon’ is set to arrive on Netflix in December • TechCrunch