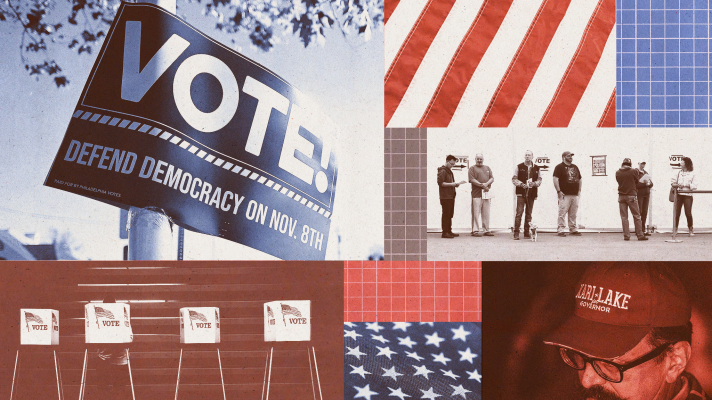 
A few weeks before the midterms, I attended an election-denying group’s Zoom meeting. There had been alarming reports of a massive, well-funded campaign to place election deniers in voting centers that could cause havoc on Election Day. I wanted to know exactly what these groups were telling these volunteers, so I found one in Pennsylvania and quietly attended an open session. What I heard that night surprised me. The training session provided would-be poll watchers with accurate, useful information about the responsibilities and limits of their role. It was more bureaucratic than baleful. And the threat of an army of conspiracy-minded meddlers interfering in the voting process never materialized: There were few reports of disruptions on Election Day and no widespread internal efforts to hinder the voting or counting process.

So, was this a win for democracy? On the one hand, free and fair elections form the bedrock of most people’s idea of democracy, so it’s, y’know, cool that there was no sinister behavior from conspiracy-minded poll watchers. On the other hand, groups that, with the encouragement of former President Donald Trump, tried to overturn the last election were recruiting and training volunteers to oversee this one, which isn’t very reassuring. Elsewhere, there were threats that never materialized, extreme candidates winning primaries but then losing general elections, candidates refusing to concede — but fewer of them than expected.

This mixed bag makes it difficult to gauge where democracy stands as we bid adieu to 2022. In the great ledger of wins and losses, did democracy wind up in the black this year? I spoke to three experts who told me, basically, yes. There were enough positive signals this year of democracy’s endurance that we should all be reassured. But they also all noted that threats remain, and while we should collectively take the W for democracy, we shouldn’t let our guard down as we head into 2023.

“A lot of us saw this kind of doomsday scenario coming where politicians just stopped conceding their losses and democracy in that case becomes pretty unworkable,” said Ryan Enos, a government professor at Harvard University. “We’ve only had one election since Trump started forcefully denying the election in 2020 but if you’re going to project out, it looks like 2020 was more of a blip and that wasn’t something that was becoming the norm. And that should make us feel a lot better about election denial.”

Over the past two years, American democracy has faced renewed threats. The most obvious has been Trump’s crusade to overturn the results of the 2020 election, which inspired the deadly attack on the U.S. Capitol on Jan. 6, 2021, and led 147 Republican federal lawmakers to refuse to certify some of the results of that election. Lawmakers then passed a historic number of laws restricting voting in dozens of states, often explicitly in response to fears around election fraud. Election workers faced threats of violence and harassment like they’d never seen before. And to top it all off, hundreds of candidates who denied the legitimacy of the 2020 election ran for office in 2022, including for positions that hold meaningful authority over running elections and certifying their results.

All of this made for a pretty grim outlook on democracy at the beginning of 2022. Experts repeatedly sounded the alarm over the ongoing threats and warned of a terrifying drift toward authoritarianism. But by the time the midterms finally came to a close, a number of signs reassured us that democracy in America is resilient.

Notably (though it’s disturbing that it’s notable), the vast majority of candidates who lost their races in the November midterm elections conceded, including some of the more extreme Republican candidates who were poised to follow in Trump’s footsteps and refuse to accept an outcome where they lost. Though this is an admittedly low bar to clear, losers conceding their races is something experts believe to be essential to democracy. It’s also something many believed wouldn’t happen as widely in 2022, according to a survey conducted by Bright Line Watch, an academic group that studies democratic norms in the U.S.

The election also brought several other encouraging signs, like the fact that voters largely rejected candidates who both denied the legitimacy of the 2020 election and were running for a position where they would have meaningful influence over elections. This happened even in states where Republicans won other statewide offices, suggesting that the rejection of anti-democratic candidates wasn’t simply a pivot away from the GOP. We also didn’t see widespread distrust in the outcome of the midterms like we saw in 2020, despite efforts from Trump and other right-wing influencers to sow doubts yet again.

And this isn’t just a vibe — it’s been captured in polling. Another survey from Bright Line Watch following the election found that confidence in the results increased after the election, including among Republicans, while belief in widespread voter fraud continued to tick down. Back when Bright Line Watch asked Americans about their confidence in the 2020 election results immediately before and after the contest, they got significantly different answers, according to Gretchen Helmke, a political science professor at the University of Rochester and a co-director of Bright Line Watch.

“For Republicans, it just tanked,” Helmke said. “This time around, it went up slightly at the personal level and the state level, but the big story for me is that there was no downward change at the national level among Republicans, that seemed like really good news to me.”

And as I noted earlier, there were no widespread antics with the voting or vote counting process, as some feared. Part of that may have been due to election officials working with law enforcement to protect the process, according to Wendy Weiser, the director of the Democracy Program at the Brennan Center for Justice. “There was a dramatic mobilization to rein in the risk and build up the guardrails that was very effective,” Weiser said.

This isn’t to say that democracy is fine forever. The experts I spoke to all said there remain threats to democracy, and that vigilance and shoring up safeguards — such as reforming the Electoral Count Act — are just as important.

“The type of threats that make populist forces gain traction, like underlying inequality and people feeling powerless, those probably haven’t gone away,” said Enos. “The fact that the lies gained traction was more of a symptom than a cause.”

But as far as 2022 is concerned, let’s take the W for democracy.

The number that will shape Republicans’ politics in 2023 | FiveThirtyEight