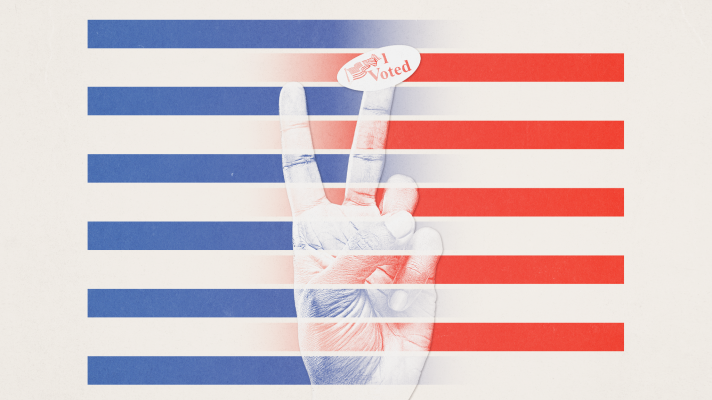 
Welcome to Invisible Divides, a series exploring the profound differences in worldview between Democrats and Republicans. These beliefs about education, religion, gender and race align with partisanship — but run much deeper. Differences like these don’t just influence the ways Democrats and Republicans vote, but also how they think about their place in America. And they help explain why opposing views on important issues today seem increasingly irreconcilable.

Julian Morein was sitting in the back room of a Hillary Clinton campaign office when he realized that Donald Trump was going to win the 2016 election. He was 17 years old, and although he was just a few months away from being able to vote, he had been spending all of his free time working to get out the vote for Clinton in his home state of Pennsylvania. “I remember everyone my age just feeling like our futures had been stolen,” he said. “The older volunteers were devastated, of course, but they weren’t as angry. For us — the younger people — we felt like the older generations had failed us. And now we were the ones who were going to have to pay.”

Six years later, Morein is out of college and working at a nonprofit in Philadelphia. He’s voted in every major election since he turned 18. He’s part of a generation of new voters who became adults in the shadow of the 2016 election. And according to an August FiveThirtyEight/PerryUndem/YouGov survey of likely voters, politics is especially personal for Generation Z.

The youngest generation of voters is more likely than older groups to vote for Democrats — but it also has a much more radical view of how the country should address long-standing problems. According to our survey and others, voters ages 18 to 29 are more likely than any other cohort — even those only a decade or two older — to say that abortion should always be legal, that racism and racial inequality are big problems in the U.S. and that they favored dramatic moves to undo injustices of the past, like cash payments to descendants of enslaved people. What’s more, many young Americans have told us that they feel compelled to vote because their values and goals feel so at odds with the people controlling the levers of power.

Historic events of the past few years have defined many young voters’ worldviews, too. One such watershed moment was the May 2020 video of Minneapolis Police Officer Derek Chauvin kneeling for nine minutes on the neck of a 46-year-old Black man, George Floyd, killing him. A summer of protests against racial injustice throughout the country would follow, along with Chauvin’s conviction.

Voters under 30 were most likely to view racism as a systemic problem that must be addressed. In our survey with PerryUndem and YouGov, they were the only age group with a majority (57 percent) in favor of cash payments for descendants of enslaved people. When we asked whether they agreed with the statement, “White men are the most attacked group in the country right now,” only 26 percent agreed, the least of any age group. They were also the most likely to think that people of color becoming a majority of the U.S. population would strengthen the country, with 39 percent saying so.

In some ways, this generation of voters is already living in the United States of the future, which may be driving their attitudes. According to the Center for Information & Research on Civic Learning and Engagement at Tufts University, the country’s youngest voters are also its most diverse age group, in every region. They’re becoming adults in a nation that already looks more like it will in 2050 — when demographers project that non-Hispanic white Americans will be a minority — than the past. There’s also some evidence these young voters have been learning about racial inequities in and outside of school: Over half said that they had recently read books that dealt with racism.

The young voters we spoke to did not all offer unqualified support for the Black Lives Matter organization itself, but many were generally well informed about the movement’s mission and goals. Matthew Messina, a 20-year-old college student from New Jersey, agreed with most of the group’s values relating to racial equity and social justice, but disagreed with some of their advocacy on specific issues, like defunding police departments. “I think [reforming policing should mean] more of funding social programs, increasing access to counselors for people in mental health crises, like that kind of thing,” he said.

Sergio Mata, a 30-year-old artist from San Antonio, said his support of the Black Lives Matter movement had cooled since he’d heard about New York Magazine reporting that raised questions about how the organization was spending its donations. But he still believed in its ideals and sees racism in his everyday life. Mata, who is Latino, said San Antonio still feels like a very segregated city. “They say the white people live on the north side, Black people live on the east side, and then the Mexicans live on the west side,” he said. “And even to this day, you could still feel that mentality here.” Despite that, he still feels that his home city is a more liberal island in a conservative state. He feels uncomfortable traveling elsewhere in Texas, like when he visits his boyfriend’s family near Waco.

For Mata, legalizing marijuana would be a big step toward erasing racial disparities in the justice system. “I don’t want any people I know sitting in prison over something that’s fully legalized in other states,” he said. “That still really upsets me.”

Kelly Jacobs, a 26-year-old graduate student who lives in Delaware, wants politicians to start at a more fundamental level. “I want them to publicly acknowledge that racism still exists, and it’s still a huge problem,” she said of the people she voted to elect. “Systematically, we need change.”

The Dobbs ruling that overturned the constitutional right to an abortion was another turning point for some young voters — evidence to them that the country was going backwards, not just on abortion rights but on a wide range of connected issues. As abortion bans started being implemented in states around the country, Jacobs realized that it was closing opportunities for her. “There will be certain states where I can’t take a job now because I know I won’t have a right to an abortion if I need one,” Jacobs said.

The conservative court’s ruling was particularly at odds with the views of young Americans, who have become much more supportive of abortion rights over the past twenty years. According to Gallup, which has conducted regular surveys of Americans’ attitudes toward abortion for decades, nearly half (47 percent) of 18- to 34-year olds in 2022 said they supported abortion rights under any circumstances, up from 28 percent in 2001.

And as with race, many young voters don’t see abortion as a discrete issue, affecting only the people who want to end a pregnancy. A separate PerryUndem survey (not conducted in partnership with FiveThirtyEight) conducted after the Dobbs ruling found that young adults (ages 18-29) were more likely than older age groups to say that it made them think about how abortion relates to other issues like sexism and racism, losing access to birth control and the potential for LGBTQ people to lose the right to marry.

Joshua Martinez, a 21-year-old who identifies as an independent but voted for several Republican candidates in the midterms, told us that he thought the justices were right to let the states set their own agendas on abortion. But he was concerned that the Dobbs ruling might signal the court’s willingness to roll back other protections, like gay marriage. “That could impact people I care about,” he said.

These major news events may reshape the electorate. The PerryUndem survey found that young adults were more likely than any other age group to say that the Dobbs decision made them want to vote in the midterms and would have a long-term impact on who they vote for. But even if younger Americans simply followed the typical pattern for all voters and vote more frequently as they grow older, the experiences that could shape their political evolution are happening now — which could in turn shape the future of the country.