ARTIST, CURATOR, AND EDUCATOR Deborah Willis, whose influential career has focused on how Black people and gender are represented, has won the $200,000 Don Tyson Prize for the Advancement of American Art from the Crystal Bridges Museum of American Art in Bentonville, Arkansas. Given every two years, the award has previously gone to Project Row Houses, vanessa german, and the Archives of American Art . An exhibition organized by Willis, “The Black Civil War Soldier,” which features photographic portraits, is now on view at the New York University Kimmel Windows Gallery. In 2020, Willis’s work was profiled in ARTnews. 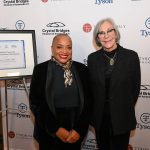 BLACK AND BLUE. What is going on at Superblue? When the experiential-art venture—from the Pace Gallery and Laurene Powell Jobs’s Emerson Collective—launched in the summer of 2020, there was talk of having locations on three continents and finding ways to “reinvent how art is shown.” Today, it has a single branch, in Miami. In ARTnews, Daniel Cassady has a deep dive into “cost overruns, mismanagement, and a board structure that has plagued decision-making” at the firm. The Emerson Collective has stepped back, giving up its board seats, and Pace CEO Marc Glimcher has, too, shifting from chairman to adviser. For more, head to ARTnews.

Nate Freeman reports that prized works from Kenneth Griffin’s collection that were once on loan to the Art Institute of Chicago have mysteriously made their way to the Norton Museum of Art in West Palm Beach, Florida. It’s a big week for news about Griffin, who recently sued the IRS. [Vanity Fair]

There’s never a dull moment over there at Stonehenge! Archaeologists examining a burial mound near the world-famous site, which dates back 5,000 years, have discovered an ancient goldsmith’s toolkit. It appears to be around four millennia old, and to have been part of Wessex culture, which was active after Stonehenge’s construction. [The Guardian]

At Christie’s next month, actress and activist Jane Fonda will sell 14 works from her collection by the storied artist Thornton Dial, who is best known for his ingenious assemblages, as well as his son Thornton Dial Jr. and his brother Arthur Dial. [The Hollywood Reporter]

Tsione Wolde-Michael, who leads the Center for Restorative History at the National Museum of American History in Washington, D.C., will serve as executive director of the President’s Committee on the Arts and the Humanities. Wolde-Michael is the first Black person to hold the post. [The Art Newspaper]

Salma Tuqan, the deputy director of London’s Delfina Foundation, has been hired as director of the Nottingham Contemporary art center in England. She has also been the V&A’s contemporary Middle East curator for the past eight years. [ArtReview]

Aay Preston-Myint has been named executive director of SF Camerawork, the nonprofit photography gallery located in San Francisco’s Fort Mason Center. They are coming from the Headlands Center for the Arts, where they were senior manager of public programs and fellowships. [Press Release/SF Camerawork]

After a six-year run, critic Dean Kissick is ending his venturesome Spike column, “The Downward Spiral.” Kissick will continue to be the magazine’s New York editor. [Spike]

SUPPLY CHAINS. Since the 18th century, Paris’s La Maison du Pastel has been supplying its prized pastels to artists, from Édouard Vuillard to Winston Churchill to Richard Serra, and the Financial Times has a story on how it survived—sometimes just barely. It is now owned by Isabelle Roché (a distant cousin of its founder) and Margaret Zayer , who have revived the firm after a precarious stretch in the latter half of the 20th century, when it was run by a Reneé Roché, and then her daughter Huberte. “Huberte was a fucking saint,” Zayer told the paper. “The three sisters had no children; they lived with a lot of hardship. They did it all for their artists.” [FT]