Last November, the sale of a copy of the Constitution turned heads when a group of crypto enthusiasts began ConstitutionDAO to crowdfund a winning bid for the rare document. Now, a new unaffiliated group under the moniker ConstitutionDAO2 is aiming to do the same for another copy of the founding print when it comes up for sale at Sotheby’s next week.

One of just 13 known remaining copies from the first printing of the Constitution, the present edition last changed hands more than a century ago, when it was gifted to the rare books collectors Adrian Van Sinderen. It is estimated to sell for $20 million–$30 million, the highest estimate ever slated for a historical document in a public sale. It will be offered at Sotheby’s New York headquarters on December 13. 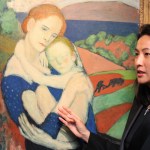 Aiming to raise public and private funds to place the winning bid to buy the print, ConstitutionDAO2 is made up of a group of 16 separate online organizations. It includes Juicebox, Nucleo, Aztec Network and MoonDAO, alongside PeopleDAO, which oversees tokens originally produced by ConstitutionDAO. That group is now run by separate individuals, who have remained anonymous.

The news comes a year after Citadel founder Ken Griffin outbid the first coalition of crypto investors, who had raised more than $40 million from over 17,000 to buy the copy. Griffin won the lot, long privately held in the holdings of New York philanthropist Dorothy Tapper Goldman, paying a final price of $43.2 million for it. After being revealed as the buyer, the financier and Republican donor publicly raised doubts about the DAO group’s populous approach—questioning if a “large decentralized group,” could preserve the rare document. He eventually loaned it to the Crystal Bridges Museum of American Art, established by Walmart heiress Alice Walton.

The new group of crypto buyers appears to be pushing back on Griffin’s ideas of stewardship. “Exclusive institutions and collectors control some of the world’s most important civic artifacts,” the website’s mission statement reads. “We aim to bring these artifacts under a Web3 decentralized governance model.”

The group said the purchase of the document is meant to be the launching point to “start a collection of civic artifacts that are totally run by the people.” It called last year’s auction that spurred other DAO groups to organizer “a cultural moment.”

A website organized by the initiative has said that if the auction is one the document will be held under UnumDAO, a nonprofit organization. If the group is successful, donors of public fundraising effort will have voting power to govern the document’s care and display, the group’s statement says. As of Wednesday, it has raised 27.8 ETH (around $34,000) in public contributions, though its mission statement says the group aims to shield the final amount it will raised prior to the auction. “We will use a combination of public and private fundraising to hide our bidding ammo,” the website’s statement said.