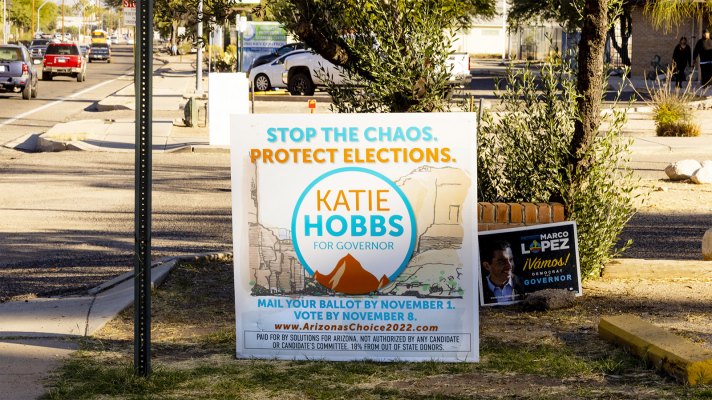 When Democracy Was On The Ballot In 2022, Voters Usually Chose It


Kari Lake, the Republican candidate for governor of Arizona, made denying the results of the 2020 election central to her campaign this year. And while she hasn’t yet conceded, she lost that race to Democrat Katie Hobbs. It was one of the most high-profile examples of a pattern we saw over and over again in the midterms: When election deniers ran for offices that have significant oversight over elections themselves, voters rejected them.

There was a lot of talk about democracy being on the ballot this midterm cycle, with hundreds of candidates who refused to accept the outcome of the last nationwide election. And while many of those candidates (particularly incumbents) won their races, when it came to those who would have a direct impact on how elections are run and votes counted, the trend was clear. Voters chose democracy.

While members of Congress obviously have a role to play — 147 Republicans voted not to certify some of the results of the 2020 election, and a handful of Democrats have done so in past cycles as well — state-level officials hold the most immediate authority over elections. In particular, secretaries of state serve as the chief election official in most states, and overseeing elections is a big part of their job. Voters recognize this and, when state-level candidates were adamant election deniers, they not only lost, they typically did worse than other state-level candidates.

In Pennsylvania, Republican Doug Mastriano lost the governor’s race by more than 14 percentage points to Democrat Josh Shapiro. The governor of the Keystone State appoints its chief election official, so this is a role with an even more direct impact on elections than in other states. Mastriano was one of the most hardline election deniers running for office this year, and even attended the rally on Jan. 6, 2021, which later turned into the attack on the U.S. Capitol. Comparatively, Mehmet Oz, the Republican who ran for Senate in Pennsylvania, lost by less than 5 points. Oz not only ran for a position that would less directly impact elections in the state, but he also didn’t make the 2020 election central to his campaign — he never said it was stolen from Trump, though he did question the results at times.

In Arizona, though Lake lost by less than 1 percentage point, the Republican candidate for secretary of state, Mark Finchem, performed much worse, losing by nearly 5 points. Like Lake, Finchem equally embraced Trump’s baseless election fraud claims, but unlike Lake, he was running for a position where overseeing elections is arguably the most important part of the job (no shade to keeping records and administering the Uniform Commercial Code, but, let’s be honest). Blake Masters, the Republican candidate for Senate, also lost by about 5 points. He, too, ran on false claims during the primary that Trump won in 2020 and that big tech and the media “conspired” to rig the election — though he later softened his stance ahead of the general election. However, in another statewide race, the Republican comfortably won by a wide margin. Kimberly Yee won reelection for the state treasurer, a role that has no direct impact on elections, by more than 11 points. This is another example of voters in Arizona not simply turning against the GOP this election cycle, but specifically rejecting certain candidates running for particular offices.

New Hampshire provides a similarly apt comparison of statewide races. Like Masters, the Republican candidate for Senate, Don Bolduc, originally campaigned on the false claim that Trump was the rightful winner in 2020 before later pivoting to say the election was not, in fact, stolen. Bolduc lost his race by more than 9 points, while Republican Gov. Chris Sununu — who rejected Trump’s claims from the get-go — won reelection by more than 15 points.

Finchem, Mastriano, and Lake were part of a group of 17 primary candidates endorsed by the America First Secretary of State Coalition, an organization run by a QAnon-supporting influencer that aimed to get election deniers elected to key positions like secretary of state. Of those 17 candidates, only one — Republican candidate for Indiana Secretary of State Diego Morales — prevailed (many of the candidates lost during the primary elections). And despite getting the seal of approval from this group, Morales has said that 2020 was “obviously” a “legitimate election.”

There are still a lot of reasons to be concerned about the state of democracy in America — 2021 brought a massive wave of new voter restrictions, a disturbingly high share of Americans think political violence is justified, and pending court cases could severely limit efforts to curtail gerrymandering or restrictive election laws. But over and over again this fall, voters in this country made it clear that, given the choice, they’re still picking democracy.