LA3C, an upcoming two-day culture and creativity festival launching later this month, will feature installations by a group of celebrated artists, including Jacolby Satterwhite, For Freedoms, and Patrick Martinez.

PMC—the parent company of ARTnews and Art in America, as well as Rolling Stone, Variety, Billboard, and SheKnows, among other publications—launched LA3C Culture & Creativity Festival last July, but had to postpone the event due to the pandemic. The festival is a celebration of culture in Los Angeles. 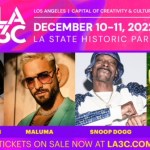 The festival will run from December 10 to 11, and will also feature performances by touted musicians such as Megan Thee Stallion, Maluma, and more.

LA3C will also include eight augmented reality pieces that were initially part of an initiative known as “LACMA x Snapchat: Monumental Perspectives.” Artists Mercedes Dorame, I.R. Bach, Glenn Kaino, Ruben Ochoa, Ada Pinkston, Judy Baca, Sandra de la Loza, and Kang Seung Lee will have works on view through that project. Each of their works will be viewable at a specific location in the city.

2022-12-04
Previous Post: Lululemon Belt Bag Restock: Shop Before They Sell Out… Again
Next Post: The Midterms Made State Governments Bluer