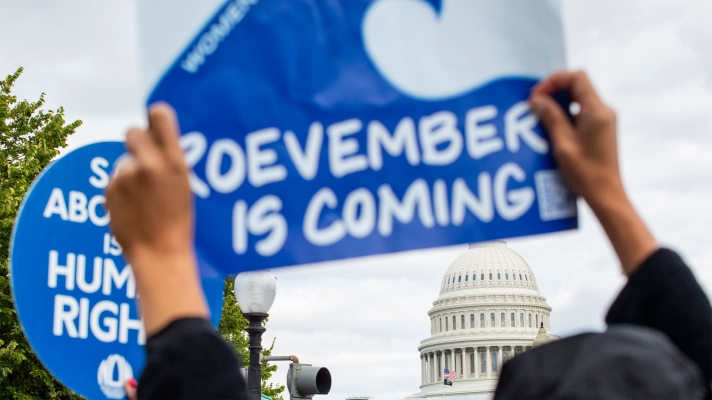 Abortion Was Always Going To Impact The Midterms


Abortion turned out to be a driving force in midterm races across the country, helping Democrats maintain control of the Senate and limit their losses in the House. But if you were following news coverage in the lead-up to the election, the impact of abortion may have come as quite a surprise. In the month before the election, multiple major media outlets reported that voters’ outrage over the Supreme Court’s June decision overruling Roe v. Wade was fading. Inflation, not abortion, seemed to be rising in importance, making Democrats’ focus on abortion look like a risky gamble. “The debate over abortion rights has not emerged as a political silver bullet for Democrats,” reporters for The New York Times wrote on Nov. 4.

Why did election results diverge so dramatically from the media narrative in the last month of campaigning? It turns out that clues to this outcome were present in the polling all along. As the election grew closer, several tracking polls showed that abortion was not receding in importance for voters, particularly Democrats. Inflation generally ranked higher when voters were asked which issues were most important for the country, but abortion remained important for Democrats throughout the summer and fall. And the share of voters who said the issue was motivating their vote actually rose between July and September, according to one pollster. Abortion was also an issue where Democrats were especially unwilling to compromise and vote for a candidate with whom they disagreed — unlike inflation. And in places where abortion was directly on the ballot, voters were particularly likely to say they were casting their ballot based on abortion.

Together, all of this suggests that while most people perceived the economy as a more pressing concern generally, abortion was a motivating issue for a substantial number of voters — and their enthusiasm may have helped give Democrats an edge in the election.

Consistently asking the same question over and over again is one of the best ways to see if public opinion is changing. According to weekly polls by YouGov/The Economist, abortion started growing in importance months ago, particularly after a draft of the opinion overturning Roe v. Wade leaked in early May.

The polls found that the share of respondents who said abortion was a “very important” issue for the U.S. rose even more after the official ruling in June, particularly among Democrats. Abortion was ranked as “very important” by between 57 and 68 percent of Democrats every single week after the decision came down, suggesting the issue was not fading from voters’ minds. (This was a continuation of a longer trend: Previous FiveThirtyEight analysis showed that abortion started gaining in importance for Democrats as early as September 2021, when Texas banned the procedure after approximately six weeks of pregnancy.)

Despite talk of inflation overtaking abortion as a priority, the percentage of Americans who ranked it among their top concerns remained pretty steady throughout the fall. For example, in our ongoing FiveThirtyEight/Ipsos poll conducted using Ipsos’s KnowledgePanel, between 9 and 13 percent of respondents selected abortion as one of the most important issues for the country in every survey conducted after the Dobbs v. Jackson Women’s Health Organization decision leaked in May. In those same surveys, “inflation or increasing costs” was ranked as one of the most important issues by between 55 and 63 percent of respondents. Reporting and analysis focused on the fact that concern over inflation was far more widespread than concern over abortion, taking that as a signal that the issue was fading in importance. The fact that there was no substantial change in how respondents viewed either issue from June through October was largely ignored.

But crucially, the share of people who said that abortion was a key reason to vote — rather than just an important issue — seemed to grow as the election season went on. After all, concern about an issue doesn’t necessarily translate into voter enthusiasm, and some Americans who said inflation was their top concern overall may have been more influenced by abortion when they cast their ballot. In September, polling from the Kaiser Family Foundation found that the number of voters who said the Dobbs decision made them more motivated to vote had increased from their previous survey in July, from 43 to 50 percent. The September survey also found that Democrats were more than twice as likely as Republicans to say that the Dobbs decision was motivating their vote. And in KFF’s analysis of midterm exit polls, 38 percent of voters said that the Supreme Court’s decision to overturn Roe v. Wade had a major impact on their decision to vote — including 57 percent of Democrats — which was much higher than the share of voters who said abortion was their top concern in pre-election polling.

Moreover, abortion was more likely to be a dealbreaker issue for voters — one where they were unwilling to compromise and vote for a candidate with whom they disagreed. In a Fox News survey conducted in mid-October, for example, voters were asked an open-ended question to identify an issue that “is so important to them that they must agree with a candidate on it, or they will NOT vote for them.” Twenty-one percent of registered voters named abortion, while only 6 percent named inflation and 8 percent named the economy more generally. This was especially true among Democrats: Twenty-nine percent of Democratic voters said they would not vote for a candidate they disagreed with about abortion, compared with just 15 percent of Republicans.

The idea that abortion is a particularly important issue for Democrats isn’t new. In research conducted between 2019 and 2021, political scientists John Sides, Chris Tausanovitch and Lynn Vavreck ran a series of experiments to determine which issues voters prioritize. They offered subjects choices between candidates who agreed with some of their positions, but not others, to find where voters might be willing to compromise. According to their surveys, 75 percent of Democrats opposed total abortion bans, and it was one of the issues on which they were least willing to compromise. Only 29 percent of Republicans, meanwhile, supported total abortion bans, and the issue of abortion was much more important to that small group than to the much larger slice of Republicans who opposed total abortion bans, or were unsure.

And tucked within the preelection polling is some regional variation that sheds light on how abortion may have played an outsized role in certain states or races. In the September Kaiser Family Foundation survey, voters in states where abortion had been fully or near-fully banned after Dobbs were 19 points more likely to say abortion laws motivated them to turn out than voters in states where abortion was protected.

Emerson College conducted surveys in dozens of states this cycle. In their final October surveys, the issue of abortion access was significantly more salient in some key states, particularly Michigan. Likely voters were asked, “Which of the following issues is most important in determining your vote this November?” Among the 9 options offered to respondents were “abortion access” and “economy (jobs, inflation, taxes).”

Across the board, more voters said that economic issues were most important for determining their vote. But Michigan voters were especially likely to prioritize abortion, and it’s easy to guess why. The state’s abortion laws were up in the air following Dobbs, and a constitutional amendment that would guarantee abortion access was on the ballot, so voters had the opportunity to decide whether abortion would remain legal in their state. Not only did that amendment pass, but Democrats won full control of the state legislature for the first time since the election of 1982, while also winning every statewide race. In New Hampshire, where voters were particularly likely to say that abortion was most important in determining their vote, Democrats successfully defended potentially vulnerable Senate and House seats. In New Mexico, where abortion was also a highly ranked issue, Democrats flipped a House seat that was rated as “likely Republican” by our forecast, ousting one-term incumbent Rep. Yvette Herrell in New Mexico’s 2nd District.

Of course, those polls don’t offer clear answers for everything that happened in the election. The economy dramatically overshadowed abortion as a voting issue for Pennsylvania voters in the Emerson survey, even though abortion access was very much at stake, and Democrats made a strong showing, flipping a Senate seat, winning the governor’s race and possibly claiming a majority in the Pennsylvania House of Representatives for the first time since the Republican wave election in 2010 (the outcome is still unknown). But other polls found that abortion was more important for Pennsylvania voters: A Marist poll in late October/early November found 20 percent of registered voters said it was “top of mind” (inflation was higher, at 36 percent), and a Fox News survey in late October found that 24 percent of Pennsylvania voters called it the most important issue for their Senate vote, not far behind inflation (33 percent).

Overall, there was plenty of data indicating that abortion consistently remained an important issue for some Americans in the months after the Supreme Court decision. And even though most voters were more concerned about inflation, abortion was motivating a significant number of them. In a normal midterm year with an unpopular Democratic president, the possibility that Democrats might maintain the Senate — and even narrowly lose the House — might seem outlandish. But the Supreme Court ensured that this would not be a normal year. And despite media skepticism, there were plenty of polls pointing in that direction.