“Hear Me Now: The Black Potters of Old Edgefield, South Carolina,” an exhibition at the Metropolitan Museum of Art, examines ceramic vessels made by enslaved Black potters in 19th-century South Carolina. The artisans responsible for crafting the displayed jugs and jars—whose sale typically benefited factory investors and owners—remain largely anonymous. But it is clear they were part of shared networks of knowledge and skill. “Hear Me Now” reassesses the aesthetic and social contours of these works, counteracting historical erasure by highlighting their makers’ training, expertise, and artistic agency. 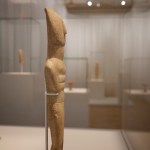 Drake’s vessels are often quite hefty: The exhibition’s centerpiece, produced in 1858, is a stoneware jar inscribed A VERY LARGE JAR WHICH HAS 4 HANDLES / PACK IT FULL OF FRESH MEATS – THEN LIGHT CANDLES. The piece’s exceptional dimensions (measuring more than two feet tall and almost two feet in diameter, likely involving collaboration with other ceramicists), as well as its four handles and witty couplet, suggest it was made for practical purposes—namely, to store beef or pork later distributed as rations to plantation slaves—but the epitaphic text also suggests it could serve as a monument to those who used it. That Drake crafted his pieces to exceed their workaday function is evident not only in his poetic inscriptions, but also in his abundant use of alkaline glaze (a regional technique producing a thick, lustrous coating). For all its literal and figurative gravity, Drake’s work demonstrates a sense of play and embellishment evident in other Old Edgefield objects of the period.

Similar decorative flourishes are found in the bluish-bronze iron slip swirls painted on the rim of a ca. 1845 storage jar made by an unrecorded potter at the factory Trapp & Chandler, or a portrait of a couple dancing painted on a ca. 1840 water cooler by another unrecorded potter at Phoenix Stone Ware Factory. These designs point to the tension in “Hear Me Now” between the enslaved ceramicists’ clearly nonutilitarian display of artistic skill and the slavery industry’s commercialization of Black artistry: the potters’ flourishes and inventions were a selling point for the goods they were coerced to produce, whose profits they would never reap, and for whose making they went uncredited and often uncompensated. Drake’s inscription on an 1857 vessel, I MADE THIS JAR FOR CASH – / THOUGH ITS CALLED LUCRE TRASH, encapsulates this dynamic, whereby the commercial value of Black art belies the systemic denigration of its makers.

In conveying this tension, the exhibition treads a fine line. While it emphasizes that the work of Old Edgefield potters cannot be reduced to artifacts of the conditions of enslavement and should be evaluated for its aesthetic or technical accomplishment, the show at times misstates the work’s significance. A wall text about Drake’s writing suggests that it “echo[es] the prose of abolitionists such as Frederick Douglass and Harriet Jacobs.” The comparison is incongruous with both Drake’s literary personality and the exhibition’s emphasis on artistic community, collaboration, and coproduction over the historical and critical privileging of singular, exceptional artists.

It remains unclear how viewers are meant to interpret the connections among the Old Edgefield vessels and contemporary works. From one perspective, “Hear Me Now” productively engages in what Drake’s first known signed jug of 1834 calls CONCATINATION: the linking of ideas, things, or events into a series to produce a desired effect. The show illuminates the communal networks of skill and artistry that made the works of Drake and his contemporaries possible. From another view, it risks reducing historical differentiation across time and space to a static Africanist sameness, as when, for example, a wood and iron “Power figure” statue from Kongo (ca. 1850) is set alongside American-made vessels of quite distinct material and appearance. Read either way, the works of Drake and his contemporaries are far too inventive to be subsumed by such perspectives.