Paraphrasing psychologist G. Stanley Hall, Allen Eaton—author, curator, and staunch advocate of the early 20th-century Craft Revival—remarked that, with handicrafts, “we rehearse the activity of our ancestry.” This image of making as playacting, or as a form of discovery, also captures how craft often works to canonize tradition even as art more broadly tries to break with it.

“Mįhą́pmąk” at the Center for Craft in Asheville, North Carolina, is in many ways a rehearsal. The exhibition finds Cannupa Hanska Luger, an enrolled member of the Three Affiliated Tribes of Fort Berthold (Mandan, Hidatsa, Arikara) in North Dakota, attempting to recover the ceramics practices of his Mandan ancestors. Mandan pottery traditions date as far back as the villages themselves. Practiced by a small number of predominantly female makers, they have been passed down via direct relatives. Characterized by their thin sides and grooved patterns—an early form of trademarking—this distinctive type of stoneware, used primarily for cooking, has been integral to the community’s culture. Yet, modern archaeologists noted an “abrupt deterioration in the quality” of the ceramics in the late 18th century. During that time, a smallpox epidemic ravaged Native American communities; priorities and skills shifted in the wake of the population’s decimation and the ongoing violence of colonization. Novice makers moved forward in translating an art form without intensive guidance; crafting pottery became akin to staging a dress rehearsal without a director. 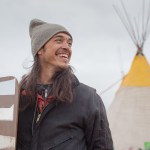 To convey the complexities and importance of revisiting that tradition, Luger, who studied relevant holdings in museum collections, harvested clay from the banks of the Missouri River, worked alongside community elders, and melded all this knowledge with contemporary methods of fabrication, presents both the traces and the results of his inspirational exercise. The methodology is as resonant as the final products.

Nestled in a nook of the Center for Craft, Luger’s show consists of three works representing a sliver of the labor undertaken. On the left, a recessed shelf holds various rocks preserved in clinical glass jars, a handful of pottery and mark-making tools, and finished ceramic vessels. One large pot and one small one, both made this year, are collectively titled simply, elegantly, nąąxįįhe (grandmother). The two are similar in form, and stand in for the variety of sizes produced and later found together by archaeologists. Both are replete with markings—diagonal lines and rainbow hash marks created with cordage, pressed around the rim and body—that hearken to historical designs. Despite the methodical air of the show, viewers may still wonder what degree of reinvention was required to make these works.

Along the back wall and right side of the exhibition space stretches a line of photos, A WAY HOME (2020–22), documenting the process in reverse order: a vessel’s creation progresses from right to left, starting with Luger scooping clay from the banks with bare hands, to forming the container with rolled clay coils, and shaping and decorating the pot with an iron anvil and grooved paddle in an inherited technique. It’s cinematic rather than instructional, more of a montage than a guide. One of the more striking and memorable images features Luger holding and reverently gazing at the stout prefired vessel in his arms: it is almost as wide as his torso and as tall as his chest.

A WAY HOME (Video Poem), 2022, disrupts the line of documentation, coming in between the clay sourcing and studio making. Just over 3 minutes in length, the video features a slow tracking shot taken along the banks of the Missouri River near Lucky Mound on the Fort Berthold Indian Reservation. Accompanying this imagery, Luger’s 10-year-old son reads a poem the artist wrote that reflects on the act of making: “The record of life is pressed into you,” the voice recites, at a volume slightly above a whisper. “Held by you. You are archive.” Clay traditions are metaphorically hinted at too. “The child of water and rock. You are the middle of soft and hard. […] You are time in memorial,” the child reads.

The speaking voice, backed by a low drumbeat suggestive of a heartbeat, is tinny and muffled, seemingly read through a telephone receiver or playing on the outdated technology of a history museum. The young narrator’s hesitation before molecular and mispronunciation of amorphous become tender moments in this meditative piece. The delivery is a rehearsal; the intonation reflects learning.

Overall, Luger’s approach to the show is that of the artist-as-researcher, not craftsperson-as-educator; the sparse exhibition lyrically summarizes years of research, exploration, and experimentation. Details one would convey in teaching an apprentice––how to mix the clay, achieve the vessel’s shape, or fire it properly––are spare. “Mįhą́pmąk,” which translates to “nowadays (in modern times)” and “here we are,” creatively inspires, but leaves the technical skills and finer points for Luger to pass on as he sees fit.

2022-11-27
Previous Post: Bobbi Brown Has the Perfect Beauty Products For This Holiday Season
Next Post: Why DeSantis Is A Major Threat To Trump’s Reelection