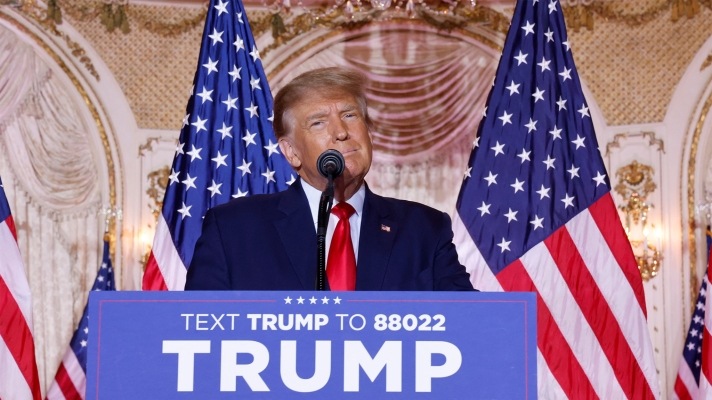 Why Trump Is Favored To Win The 2024 Republican Presidential Primary


We don’t even know every result of 2022 yet, but the 2024 election has already begun. On Tuesday, former President Donald Trump announced that he would seek a second nonconsecutive term as president. While it’s too early to predict Trump’s chances of going all the way, the former president is the current favorite to win the Republican primary again. But nothing is assured.

First, Trump remains popular and influential among Republican voters. According to Civiqs, 80 percent of registered Republican voters have a favorable view of the former president, and only 11 percent have an unfavorable view. Admittedly, he is a little less popular than on Election Day 2020 when 91 percent viewed him favorably. But the decline has been gradual.

Republican voters also demonstrated their loyalty to Trump — or at least his vision for the party — when they nominated 82 percent of the nonincumbents he endorsed in contested Republican primaries for Senate, House and governor.

Granted, that isn’t as impressive as it seems. Several times, Trump endorsed candidates who were already well on their way to winning. And Trump’s endorsees did fail to win certain highly watched contests, like the primary for Georgia governor. But just as often, Trump’s endorsement seemed to give a meaningful polling boost to its recipient. For example, Ohio Senate candidate and author J.D. Vance went from trailing in the polls before Trump’s endorsement to leading in almost every survey afterward.

Trump also leads early polling of the Republican primary by a substantial margin. In most national surveys, he registers in the high 40s or low 50s, 20-30 points ahead of his closest competitor, Florida Gov. Ron DeSantis. (Though DeSantis is polling higher than he did earlier in the year.)

Finally, Trump leads in polls of early primary states, albeit generally by smaller margins. A poll of Iowa conducted by a pro-DeSantis group over the summer showed Trump leading DeSantis 38 percent to 17 percent. In August, a poll of New Hampshire conducted by Saint Anselm College put Trump up 50 percent to 29 percent. And most recently, Susquehanna Polling & Research found Trump at 41 percent and DeSantis at 34 percent in Nevada in late October.

What Nate Silver thinks about a (hypothetical) Trump-DeSantis race | FiveThirtyEight

Obviously, we’re still more than a year away from anyone casting their votes, so those numbers could change. But an analysis by my colleague Geoffrey Skelley in 2019 found that national primary polls in the first half of the year before the election are pretty predictive of who will win the nomination. Historically, from 1972 to 2016, candidates with high name recognition who polled in the 40s and 50s nationally won the nomination more than 75 percent of the time.

But of course, 75 percent isn’t 100 percent, and we’re dealing with a small sample size here. In past presidential primaries, four candidates have polled, on average, between 40 and 60 percent in national polls in the first half of the year before the election. And three of them won their party’s nomination: then-Senate Majority Leader Bob Dole in 1996, then-Vice President Al Gore in 2000 and then-Texas Gov. George W. Bush in 2000. All three had feisty challengers — Dole and Bush each lost a handful of states — but they won easily in the end. It’s not too hard to imagine Trump following that same path in 2024.

On the other hand, then-Sen. Ted Kennedy lost the 1980 Democratic primary despite polling at an average of 47 percent in the first half of 1979. But he was also in a unique situation: He was primarying a sitting president, Jimmy Carter, who wasn’t that far behind him at 32 percent. Carter, of course, recovered to win the nomination that year. Still, Kennedy shows that Trump’s nomination isn’t inevitable.

One crucial factor will be how many candidates run against Trump. Too many could divide the anti-Trump vote, making it easier for him to win. For example, in an October poll from YouGov/the Claremont McKenna College Rose Institute of State and Local Government, Trump led DeSantis 55 percent to 45 percent when the two were matched up head to head. But when other candidates (e.g., former South Carolina Gov. Nikki Haley, Texas Gov. Greg Abbott) were included as options, Trump led DeSantis 55 percent to 33 percent.

Several potential 2024 contenders, including former Vice President Mike Pence and Maryland Gov. Larry Hogan, have indicated that they may run regardless of what Trump does. So this scenario may come to pass. But even if they do run, they may not make it to the primaries, so the race may narrow to a head-to-head between Trump and DeSantis (or another candidate) regardless. This is one of the more significant sources of uncertainty for the 2024 GOP primary — will DeSantis (or another candidate) emerge from 2023’s “invisible primary” as the dominant non-Trump candidate, or will the field still be muddled?

Another source of uncertainty is the many ongoing investigations against Trump. True, Republicans so far have shown little concern over them, but if he is indicted, all bets are off the table, considering that that situation would be unprecedented. It’s plausible that an indictment could affect Republican voters’ perceptions of Trump’s electability in a general election.

When Trump announced his first presidential bid in 2015, we hadn’t seen a candidate quite like him, and his candidacy was difficult to handicap. Even though he began that campaign very unpopular among Republican voters and bitterly opposed by the GOP establishment, predictions of his political demise proved very wrong. Seven years later, Trump is still a unique political figure: A former president hasn’t sought a nonconsecutive second term or faced criminal investigation in generations, and Trump is doing both. This time, he starts the campaign as the front-runner, not the underdog. Still, the lesson is the same: Don’t be overconfident in your predictions. With Donald Trump, anything can happen.