In August, climate change activists glued themselves to the frame of a Peter Paul Rubens painting at the Alte Pinakothek in Munich. According to a report in Monopol, the legal consequences of that action have arrived.

The Munich District Court has issued criminal orders against the two activists who stuck themselves to the frame and one against the protestor who filmed the action. The Munich I Public Prosecutor’s Office said in a statement that “a significant” but unnamed fine was applied in each case. “We will of course assert our claims under civil law,” Tine Nehler, a spokeswoman for the Pinakotheken said, suggesting that it would be an expensive number. 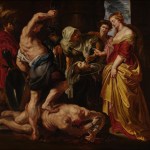 According to the public prosecutor’s office, the demonstration in August resulted in 11,000 euros worth of damage. One of the gluers and the filmmaker have objected to the penalty order, which will be addressed in a trial at the district court on an unspecified date.

The activists are members of the climate crisis group Letzte Generation, which has orchestrated a slate of actions targeting world-famous artworks at museums across Europe.

Other activists with the group have attached themselves to several masterpieces, including Raphael’s Sistine Madonna (1512–13) at the Gemäldegalerie Alte Meister in Dresden. Similar groups have hurled food at works by Claude Monet, Vincent van Gogh, Emily Carr, and others.

The aim is to “stop the fossil fuel madness” according to Letzte Generation’s website, however public opinion has been split on the effectiveness of their shock tactics to inspire change.

One of the protestors involved in the Rubens action, Michael Winter, said in a statement: “I’m sticking myself to this painting today because I’m desperate. The climate catastrophe is already here, we are already seeing people losing their livelihoods in flood disasters like in the Ahr Valley [in North Rhine-Westphalia in Germany]. Our children will also die if our government does not act appropriately [in relation to] the climate emergency.”

Deutsche Welle reported that while the canvas of Rubens’s Massacre of the Innocents (1638) was unharmed, its frame had suffered damage.

“It is not legitimate to damage unique testimonies to humanity’s culture to denounce given climatic problems,” Bernhard Maaz, the director general of the Bavarian State Painting Collections that oversees the Alte Pinakothek, told the German news outlet.

END_OF_DOCUMENT_TOKEN_TO_BE_REPLACED 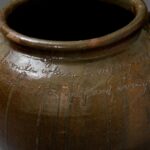