Though typically a material that disappears before the viewer, glass takes on a commanding presence in Charisse Pearlina Weston’s sculptures. Layered, warped, tinted, and folded, her sculptural panels distort and obfuscate far more than they clarify, turning glass into a surface to look at more than through. The artist amalgamates texts and images derived from popular culture, archives, and her own practice, etching and firing them onto glass, or sandwiching them between layered sheets. Yet she never allows for unmediated access, preferring instead to manipulate, fragment, and recombine her source material. 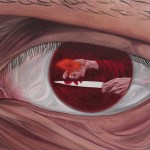 Weston frequently incorporates imagery and elements from earlier projects into new work, rooting her practice in repetition. For an ongoing series of photographic abstractions, the artist printed installation images on large canvases. Using glass shards repurposed from studio accidents, she roughly etches into the printed surface, redacting imagery and transforming the original photographs into constructivist compositions. By returning to earlier works, Weston hopes to rearticulate questions the initial pieces addressed. She returns again and again to one question in particular, which she posed during our recent conversation: “How do Black people forge, retain, and protect spaces of intimacy and interiority in the context of the environment that we’re living in?”

Weston associates glass with “the atmosphere of risk and violence that Black people face.” Employing various strategies to manipulate the fragile, transparent material into something more opaque and resistant, she evokes a tension between the desire to share a story and to secrete it away from probing eyes. In early works, the artist used readymade glass panes, but in 2018 she began to experiment with the material’s fleeting malleability in its liquid state. To create the draped, bell-like forms in an appeal, but, in particular, very expressly, to (i sink) (2019), Weston slumped molten glass over upturned flowerpots, referencing the planters and washbasins enslaved Black people used to muffle their voices during clandestine meetings. For other sculptures, the artist bends, curls, and crumples heated glass, generating crevices that obscure the imprinted images and writings.

Weston’s current exhibition at the Queens Museum also contends with the symbolic links between glass and anti-Blackness. A new body of sculptures, and the pictures and poems seared into their glass surfaces, allude to “broken windows” policing, surveillance, and the loaded, pervasive media images of shattered and boarded-up shop windows during recent BLM protests. Several works draw on the historical record of an unrealized nonviolent direct action that the Brooklyn chapter of CORE (Congress of Racial Equality) proposed for the opening of the 1964–65 World’s Fair. Demanding action on job discrimination, housing conditions, school segregation, and police brutality, the organizers called for motorists to stall their vehicles intentionally on the roadways leading to the fairgrounds. In the first of two galleries, Weston adopts a similar tactic of obstruction with her largest sculpture to date, suspending a 15-by-20-foot grid of smoky glass panes over viewers. Ominously hovering and dramatically pitched toward the passageway between galleries, it bars access and forces visitors to detour.

This tension between presentation and refusal is central to Weston’s practice, especially in her use of language. Circling around her most recent concrete- and lead-mounted sculptures—arranged at the Queens Museum on a multilevel plinth that keeps viewers at bay—we are aware of the inscribed texts but unable to fully absorb them. Intimate phrases faintly etched in her cursive stipple appear and recede from view; we catch only elusive fragments, like “a chromium-plated draw-near to neon plastic” or“such a jettison,” and strain to discern more. Weston’s multifaceted sculptures undermine the logic of a material associated with transparency to embrace the poetry of opacity, the power of resistance, and the value of withholding.

2022-11-17
Previous Post: How Princess Diana’s Fashion Has Stood the Test of Time
Next Post: Gubernatorial Races Were A Mixed Bag For Each Party