Three activists with Stopp oljeletinga (Stop Oil Exploration) in Norway were arrested at the National Museum of Art in Oslo, the German publication Monopol reports. The activists had attempted to glue themselves to Edvard Munch’s painting The Scream (1893), but were intercepted by security guards.

The three activists were women from Finland, Denmark, and Germany.

“The glue didn’t stick this time. But we won’t give in until the government meets our demands. We want to live,” activists posted on the Stopp oljeletinga Twitter account. 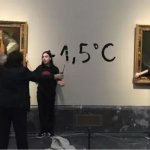 The demands of Stopp oljeletinga are similar to the demands of other eco-activists involved in museum protests: an immediate halt to further oil exploration in Norway and a plan for a transition that will see oil workers receive aid in finding new employment.

The protest follows a report by Reuters that revealed that Norway, an oil rich country, is expected to increase oil production by 13 percent in 2023, now that Norway is Europe’s main supplier of oil since Russia cut off oil exports to the EU. This news comes as world leaders convene in Egypt for COP27 to discuss how to avert severe climate disaster.

“We are on a highway to climate hell with our foot on the accelerator,” the United Nations Secretary General, Antonio Guterres said at the conference, according to the New York Times.

As museums have come to anticipate climate protests that target the arts, interception, arrests, and sentencing have become more common. Recently, more than 90 museum leaders signed a letter decrying the actions of the eco-activists, saying that the protestors “severely underestimate the fragility” of the art works they are targeting. However, thus far, none of the paintings that have been targeted have been harmed.