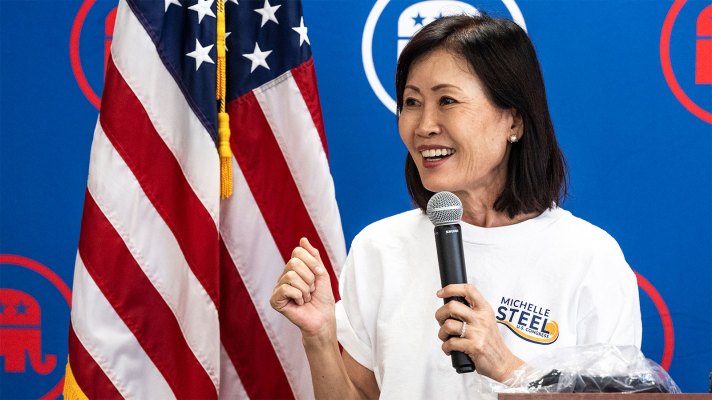 Why Democrats Shouldn’t Take The Asian American Vote For Granted


In 2020, voters elected the first three Korean American women to serve in Congress: Marilyn Strickland, Young Kim and Michelle Steel. Strickland is a Democrat — like the majority of the 67 Asian Americans who have ever held congressional seats. But Kim and Steel defied that norm as Republicans. They also did more than simply win: Both congresswomen flipped seats in Orange County, California, quickly reversing the gains Democrats made in those districts, which are predominantly Asian American, during the blue wave of 2018. The share of voters in both districts who voted for former President Donald Trump also increased from 2016 to 2020. Taken together, these dynamics represent a slow but steady warming stance toward the GOP by Asian Americans.

Though Asian Americans currently compose just 6.2 percent of the U.S. population, they’re the country’s fastest-growing minority and feature many tight-knit diasporic communities in battleground states like Texas and Georgia. And historically, voter turnout has been low among Asian Americans, a sizable share of whom also identify as independent. In other words, as toss-up races and razor-thin margins increasingly influence our politics, Asian American communities are a potentially untapped voting bloc. While Asian Americans still largely align with Democrats, the demographic’s support for the party is often, at best, misunderstood. At worst, it’s taken for granted.

For context, Asian Americans have not always voted blue. In 1992, when The New York Times first added “Asian American” as a racial category in its exit polls, 55 percent of Asian Americans voted for former President George H. W. Bush, a Republican, while 31 percent cast their ballots for then-Arkansas Gov. Bill Clinton, a Democrat. In the 1996 presidential election, Democrats narrowed the margin, with 48 percent going for Republican Sen. Bob Dole and 43 for Clinton, and by 2000 Asian Americans had drifted into the blue: Fifty-four percent voted for former Vice President Al Gore and 41 percent for then-Texas Gov. George W. Bush.

But in recent years, Asian Americans seem to be shifting red. According to a 2016 survey from Asian and Pacific Islander American Vote, 19 percent of Asian Americans held at least a somewhat favorable view of Donald Trump. When the survey was conducted again in 2020, Trump’s favorability among Asian Americans had risen to 35 percent.

One reason it’s been hard to get a clear understanding of Asian American voters is that the community is often misunderstood as a monolith. In reality, the many different ethnic groups within Asian America have many different views. For example, a plurality of Vietnamese American voters (45 percent) supported Republican congressional candidates in 2020, according to that year’s Asian and Pacific Islander American Vote survey. Vietnamese Americans, a powerful force in Steel’s California district, have been a loyally red voter bloc dating back to former President Ronald Reagan, whose anti-communism policy stances resonated with the Vietnamese diaspora by nodding to homeland geopolitics.

On the other end of the spectrum, the survey found that Indian Americans were more likely (63 percent) than any other Asian American group to support Democrats. “After 9/11, South Asians were impacted by how political language and policies helped others formulate opinions that discriminated against them,” said Lakshmi Sridaran, executive director of South Asian Americans Leading Together. She explained that even those who weren’t actually Muslim could still appear to be in the eyes of white Americans, and facing bigotry subsequently influenced many South Asian Americans to embrace the Democratic Party.

“There’s a misunderstanding from political leaders when they frame hate violence against Asians and other minorities as interpersonal — people not liking each other for whatever reasons,” said Sridaran. “It feels reductionist when they don’t acknowledge how these opinions originated from governmental policies and stances.”

A similar trend emerged more recently with Chinese Americans, too. According to AAPI Vote data, Trump lost support from the group between 2016 and 2020, which could in part be attributed to his sharply anti-Chinese rhetoric on COVID-19, like referring to the virus as the “kung flu.” Even still, Trump’s overall numbers among Asians didn’t markedly suffer — suggesting that the loss was made up with growing support from other Asian ethnic groups, specifically Vietnamese Americans and Indian Americans.

This year, Republicans are promoting issues — the economy, education and crime — that they hope can help solicit Asian American support in competitive political regions like Georgia. The recent news of the Supreme Court’s pending decision on affirmative action, too, has allowed conservatives to align themselves with the subset of Asian Americans who are against such policies. Meanwhile, in Nevada, one of the key states whose races could influence control of Congress, Republicans have leaned into highlighting Democrats’ inability to address the economic concerns of many Asian small-business owners who are suffering from inflation, and polling data suggests it’s helped secure more red votes.

Interest in Asian Americans as a voting bloc is relatively new, said Christine Chen, co-founder and executive director of AAPI Vote. “[It] really began after the 2010 census because of the population growth coming from the Asian American community,” she said. “Democrats started pointed outreach then, but Republicans are catching up now.”

But both parties still have a long way to go in reaching Asian American communities. According to this year’s AAPI Vote survey, a majority of Asian American voters said they were not contacted by their candidates or local political groups leading up to the midterms: Sixty percent said Republicans hadn’t reached out, while 52 percent said the same about Democrats. Additionally, political literature and outreach have only recently become multilingual, said Sridaran, which could leave out the views of many Asian immigrants for whom English is not their first language. All of these factors contribute to Asian American voters saying they feel ignored.

But one current House race in California also proves that not all targeted outreach is constructive, especially when it leans into inter-ethnic conflict.

In California’s newly redrawn 45th District, Steel is running against Jay Chen, a Navy veteran and entrepreneur, in what has devolved into a bitter battle. For example, posters describing Chen as “China’s Choice” were found plastered around local areas, presumably circulated to sour his image among the sizable Vietnamese American community by “red-baiting,” or harassing and discrediting someone for alleged communist sympathies. Chen, meanwhile, came under fire for mocking Steel’s accent when speaking English.

Trying to tap into these homeland dynamics isn’t new, however. Trump, for one, closely aligned himself with right-wing Indian Prime Minister Narendra Modi in an attempt to appeal to Indian American Hindus, the most well-resourced and affluent group in Asian America. It could have worked, except President Biden’s vice-presidential pick of Kamala Harris, whose mother was an Indian immigrant, seemed to have foiled Republican inroads with Indian Americans.

Ultimately, inter-ethnic dynamics among Asian American communities are only recently being understood politically, said Sridaran. And these distinctions will be increasingly important, considering Asian Americans haven’t been reliable Democratic voters for all that long. While many Asian Americans continue to align with the political left, it’s no guarantee that Democrats will hold onto the support of the country’s fastest-growing racial group.