George Osborne, the chair of the British Museum, has stated that the Parthenon Marbles will remain in the London institution’s collection under his watch, in a sharp rebuke to growing pressure for the return of the sculptures to Greece.

According to the Art Newspaper, Osborne, the former Chancellor of the UK government, commented on the ethical issue of owning looted sculptures at the institution’s annual trustees dinner on November 2.

“We hear the voices calling for restitution. But creating this global British Museum was the dedicated work of many generations,” he reportedly said. “Dismantling it must not become the careless act of a single generation.” 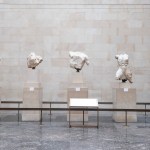 Osborne said British law supported this position, citing the British Museum Act of 1963, which restricts the deaccessioning of museum holdings.

Referring to the slate of restitutions enacted at museums worldwide, Osborne said: “How can we expect to escape from the maelstrom of the moment? We don’t. But don’t expect us to be passive in the face of it.”

Osborne did allow for the possibility of returning artifacts—many of which were violently seized by the British Empire during periods of colonization—to institutions in their countries of origins on a temporary basis.

“For some communities, the status quo is not good enough,” he said. “I am confident that there are long-term partnerships to be struck.”

The Parthenon Marbles, a group of relief panels and pedimental sculptures taken from the Parthenon in Athens by Lord Elgin, the Scottish Ambassador to Greece, in 1801, are the most contested loot housed in the British Museum. Osborne’s hardline on the issue of their restitution is sure to incite criticism from officials in Athens. Speaking in June, Osborne signaled a softening in the institution’s stance on their return, saying in a radio interview that “there was a deal to be done” regarding a possible loan agreement.

Attention has seemingly shifted at the British Museum to a major renovation plan which will prioritize ageing infrastructure in the galleries that house artifacts from Egypt and ancient Mediterranean civilizations, few of which have been open consistently over the past three years for repairs. Concerns have been raised over the condition of the prized marbles after several reports of water dripping in in the Parthenon Gallery, as well as ventilation issues.

Decrepit conditions in the western sculpture galleries have fueled calls for the institution to return the sculptures for display in the state-of-the Acropolis Museum, which opened in 2009 in Athens.

2022-11-10
Previous Post: Kay Gabriel shares her top ten
Next Post: a16z-backed Tellus wants to give you higher yields on your savings • TechCrunch